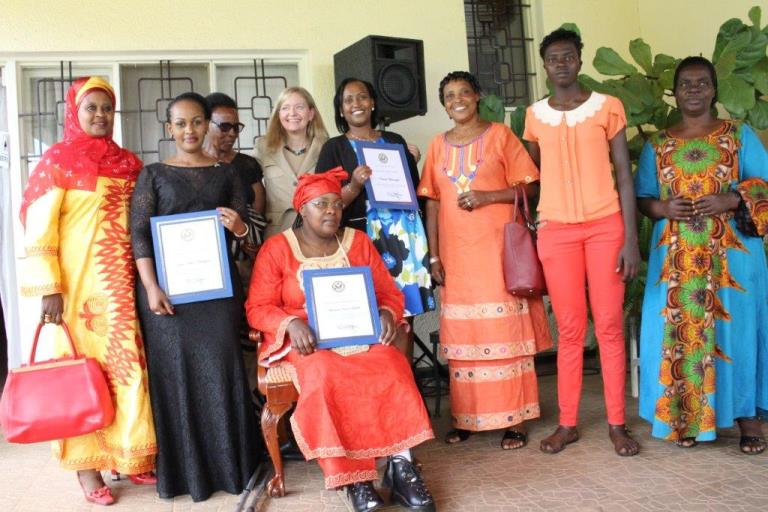 On March 22, U.S. Ambassador to Rwanda Erica J. Barks-Ruggles honored three Rwandan women at an event held at her residence to celebrate Women’s History Month.  The three women, selected from nominations submitted by U.S. Embassy Kigali’s 40,085 Facebook fans, were recognized with the Embassy’s third annual Rwandan Women of Courage awards for their exceptional service and leadership. “By honoring women, we show the next generation that they too can reach their dreams and change the world,” Ambassador Barks-Ruggles told representatives from the government, business, and NGO sectors who attended the reception.

Since 2007, the U.S. State Department in Washington, DC has presented International Women of Courage awards to inspiring women from around the world who have demonstrated exceptional courage, strength, and leadership in advocating for human rights, social justice, and women’s equality and advancement. This year, the U.S. Embassy in Kigali recognized for the third year inspiring women of Rwanda.  The three winners of the U.S. Embassy’s 2017 Women of Courage award are Chantal Munanayire, Kabanyana C. Ketsia, and Gakire Jeanne Francoise.

Last year’s awardees were Agnes Twagiramaliya, a teacher in Nyamagabe district who has dedicated herself to educating youth for 36 years;  Ms. Zulfat Mukarubega, founder of the University of Tourism, Technology and Business Studies (former RTUC); and Jeanne d’Arc Girubuntu, the only woman on Rwanda’s national cycling team.

In 2015, the U.S. Embassy recognized Chantal Ingabire, who leads a team of more than twenty lawyers, investigators, and social workers at International Justice Mission to secure justice for Rwandan children who have suffered sexual assault; Jeanne Mwiriliza, the founder of Tubahumurize Association; Liberatha Mukasine, who overcame the loss of her husband and three children in 1994 to become a successful cassava farmer in Ruhango district; and Xaverine Mukamunana, the founder of Jyamubandimwana Association.