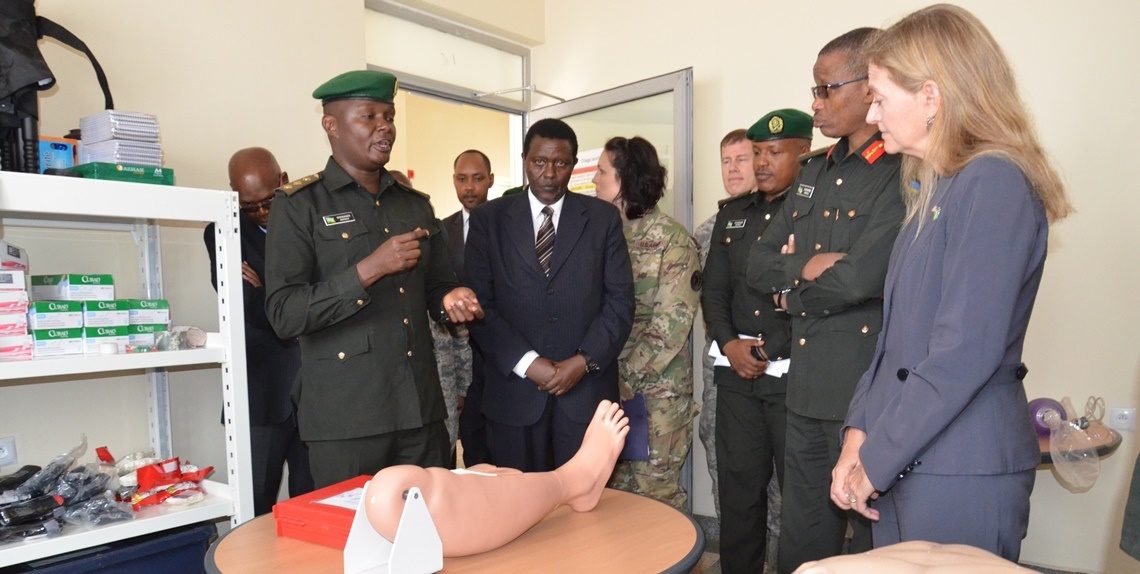 Good morning!  All protocols observed.  Thank you for making this Medical Modeling and Simulation (MMS) center a huge success.  This project represents our strong partnership in supporting peacekeeping.  As such it is an investment in Rwanda’s military medical education and defense institutions.  We are confident it will become an important tool to ensure the success of each and every medical professional trained through this center.

Under the Africa Peacekeeping Rapid Response Partnership Program, one of the areas the U.S. government is focused on is supporting Rwanda’s training and equipment needs for its continued Level 2 deployment obligations to MINUSCA and other UN and AU peacekeeping missions.  As part of this broader effort, the $275,000 (about RWF 225 million) Medical Modeling and Simulation Center which we are handing over today provides an institutional platform and capacity for Rwanda to train and certify its own medical personnel and contingents in support of its current and future peacekeeping commitments.  This center will serve as a great tool to enhance APRRP medical training initiated this year.  It will also aim to provide medical training in military medicine and disaster response preparedness targeting critical medical competencies necessary for point-of-injury to rehabilitation care in austere environments, including:  battlefield/disaster zones, Level 1 through Level 4 facilities, and in-transport evacuations.

The overall outcome of this AMEP project is an established set of curriculum intended to support existing, relevant UN medical doctrine.  We are building this foundation in partnership with Rwanda with the intent that it will serve as a regional training center in the future for other nations participating in UN Peacekeeping operations, AU missions, and disaster response.   In addition, this program will facilitate and track the professionalization of the RDF medic members at the institutional level.

I thank each and every leader in attendance for your efforts to invest in the professionalization of your own military as well as your continued commitment to peace and security across the continent.

The United States Government is steadfast in its commitment towards the professionalization of Africa’s militaries.  I am honored to be here today, in person to formally hand over the Medical Modeling and Simulation Center aimed at enhancing Rwanda’s military medical institutions as an education and training platform to further professionalize Rwanda’s clinical staff, while also supporting your continued contributions to United Nations and Africa Union Peacekeeping Missions.

I am certain that this simulation center will pay dividends towards our mutual efforts to further professionalize Rwanda’s Military Institutions and the overall enhancement of your commitment to peacekeeping.

Finally, I want to close by thanking the Rwanda Defense Force for hosting this center and for both our militaries for putting together this event.  It is a testament of your dedication towards the professionalization of your own force through strong institution-based education initiatives.