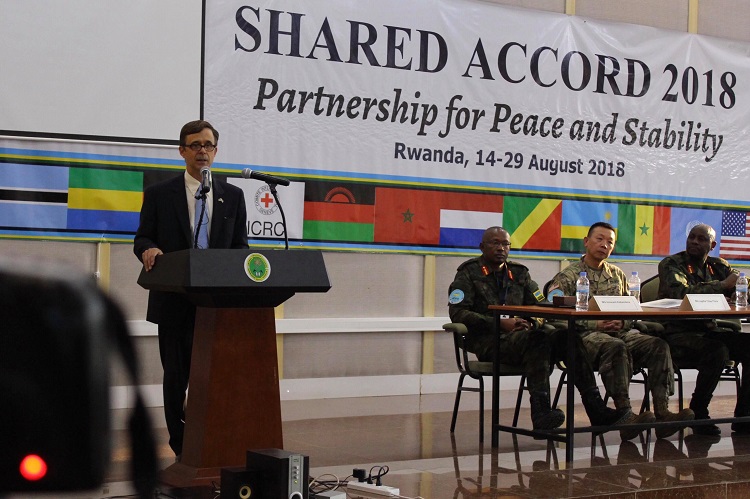 On behalf of the U.S. government, the U.S. Embassy, the Department of Defense, and the Department of State, I want to thank you all for participating and making Shared Accord 18 such a rewarding exercise. I also noticed that there are many invited guests, which include many Blue Helmets who have served in UN peacekeeping missions, as well as the defense attachés accredited to Rwanda. So, there is a broad array of people who will, as others have said, bring home many of the lessons learned, both today and tomorrow.

I think one of the takeaways that I have, is that I learned some acronyms, such as MSEL (Master Scenario Events List). But USEUAF Brigadier General Flora translated that for me. Shared Accord comprised one hundred and eight events: that sounds terrifyingly complex! [Laughter] These scenarios injected the exercise with all sorts of realism and the hypotheticals made the exercise a living creation, one that you can use for your training. Through your experience, and through your teamwork — the teamwork that General Flora commended today — you created something new. What you’ve listened to and learned from today and in the past four days, or two weeks for some of you, is something that couldn’t be captured in a book, or even in an academic study.

This creativity comes through what you’ve learned and what you bring to the table: your ability to listen, your willingness to hear other people, to confront the theories, or even the principles, or even the rules of engagement with reality and with what you face on the ground in places like Bangui. I know that some of us — Botswana Major General Barwabatsile and I were in Mogadishu together and we didn’t know it at the time but we were there together — and there is a lot that has to be learned from those experiences. We learned from failures, we learned from missed opportunities, and we learned from how others do things better than we do. I think that is something that this type of training exercise, Shared Accord 2018, really brings together.

The acronym that I think is perhaps most salient, or perhaps the lesson learned that we all take to heart is “PoC,” Protection of Civilians. Many of those things and those skills and priorities that we’ve heard today in the shortened tour that I had, come down to the How-To’s of using the Kigali Principles of Protection of Civilians and other best practices to try to really make real what you do on the ground. And it’s hard. The tasks that you have and missions to reduce armed forces and criminal groups and things that weaken the support of protection for civilians and at the same time build a legitimate state authority and law enforcement on the ground. Those two tensions in your mission, embodied in your mandates, even a good mandate, are very hard to make real. So this sort of exercise helps you to do that, and whether it’s learning about the principles of international law with ICRC or with people from UN DPKO or from your own experiences, that is critical.

I also want to salute the fact that you focused on women, peace, and security, and the important role that women peacekeepers play in making that principle real. I was in New York when United Nations Security Council Resolution 1325 on Women, Peace and Security was enacted by the UN Security Council, but its words are not self-implementing and it is really through peacekeepers and police, or soldiers, or civilians — in places such as Bangui — where that is translated into reality.

In general, I think you see here today the value of the diversity and inclusion in military and police forces. Whether it’s reflecting differences in gender, ethnicity, clan, religious diversity, you have it all here and you really have given each other the opportunity to learn a tremendous amount from each other. I would like to reiterate the message from your Rwandan and American hosts that you take with you the lessons learned and share those lessons learned with each other.