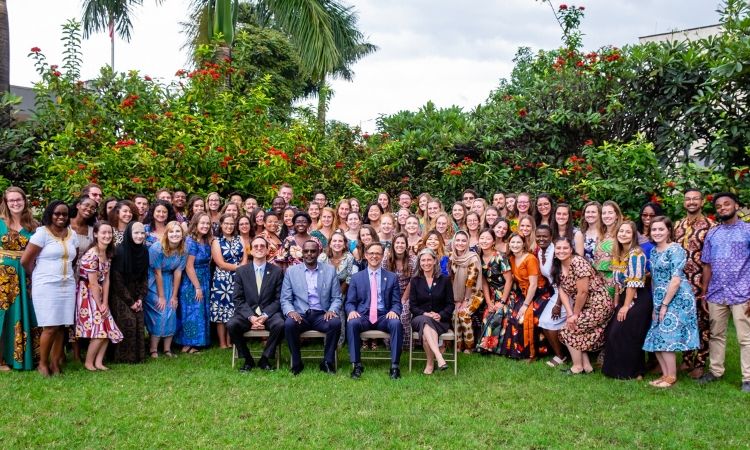 The Volunteers, who completed 12 weeks of intensive training including Kinyarwanda language training, will work in the health and education sectors to support the Government of Rwanda’s development goals. Following today’s ceremony, the Volunteers will be placed in rural communities where they will work in schools and health centers for two years, immersing themselves in Rwandan culture.

“The Peace Corps adds a very special element to the relationship between the American and Rwandan people. By living with host families, dedicating themselves to helping Rwandan communities, and becoming proficient in Kinyarwanda, Peace Corps Volunteers strengthen the trust and mutual understanding between our two societies,” Ambassador Vrooman said.

Ambassador Vrooman was joined at the ceremony by Dr. Zuberi Muvunyi, Director General of Clinical and Public Health at the Ministry of Health, representing the Rwandan Government.

Peace Corps Rwanda Country Director Keith Hackett, who administered the Peace Corps Pledge, commented, “It is an honor and a privilege for our Peace Corps Volunteers to serve alongside their Rwandan colleagues in addressing the pressing development needs of Rwandan communities. I want to thank the Government of Rwanda and our partners in education and health for their continued support and guidance. Turi kumwe!”

Peace Corps was created by U.S. President John F. Kennedy in 1961, with the mission to promote world peace and friendship. Peace Corps’ approach to development is a grass roots approach, with Volunteers living and working hand-in-hand with the members of their host communities. Since its creation in 1961, more than 235,000 Americans have served in 141 countries around the world.

Peace Corps Volunteers in Rwanda work at the invitation of the Government of Rwanda to support their development goals. Over 900 volunteers have served the people of Rwanda in the health and education sectors.