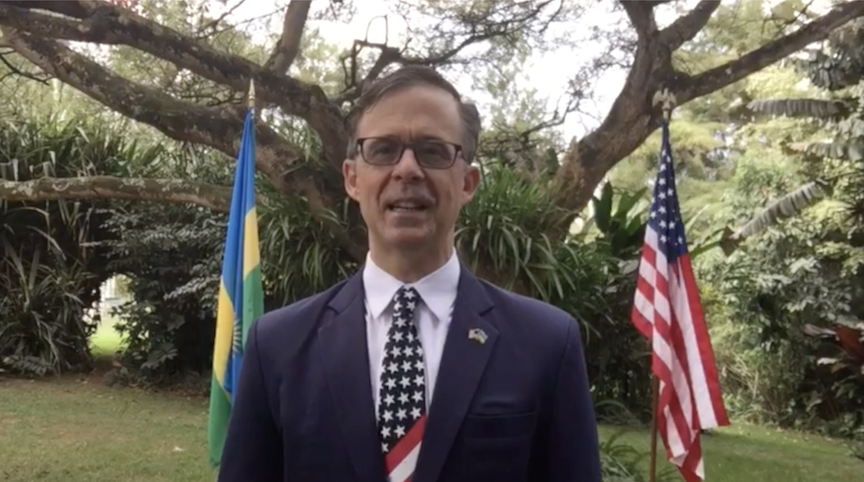 While COVID-19 means that July 4th – America’s Independence Day and Rwanda’s Liberation Day will look very different than years past, we have a special way this year to help our friends and partners in Rwanda turn the clock back to 1776.

I am delighted to announce that this weekend Embassy Kigali will host a limited number of free virtual screenings of Disney’s brand-new “Hamilton,” a film adaptation of Lin-Manuel Miranda’s award-winning musical.

On July 4, 1776, the Second Continental Congress adopted the Declaration of Independence, affirming: “We hold these truths to be self-evident, that all men are created equal, that they are endowed by their Creator with certain unalienable Rights, that among these are Life, Liberty and the pursuit of Happiness.”

Just the year before, the famous American revolutionary orator, Patrick Henry, proclaimed: “I know not what course others may take, but as for me, give me liberty or give me death!” Patrick Henry espoused the ideals of liberty for all, yet he was a slaveowner.

Those who escaped slavery believed in the ideals of Life and Liberty that inspired our Declaration of Independence, and some gave their lives too. Crispus Attucks, the first American killed at the beginning of the War of Independence during the Boston Massacre of March 5, 1770, was an African American who escaped slavery in Massachusetts in 1750. The son of an African slave father and Native American mother, Attucks is our “first American” because he took the first British bullets and died a hero of the American Revolution.

But for enslaved African Americans, the American ideals of liberty and freedom articulated by the founding fathers such as Jefferson, Madison, and Hamilton rang hollow. Harriet Tubman, an escaped slave, and an ardent abolitionist spoke profound words about freedom which echoed those of Patrick Henry.

She reasoned: “there was one of two things I had a right to, liberty or death; if I could not have one, I would have the other.”

Tubman loved Liberty and risked her Life to free herself, her family, and hundreds more from slavery. As the first woman to lead a major military operation in the United States during the Civil War, Harriet Tubman remains an inspiring American patriot who lived her values and fought for her rights.

Through the efforts of thousands of patriots like Harriet Tubman, the United States survived the Civil War and ended slavery. On June 19, 1865, the last American slaves were freed in Texas – more than two years after President Lincoln’s Emancipation Proclamation, and two months after the end of the Civil War. African Americans celebrate June 19th as Freedom Day, or simply “Juneteenth.”

Texas only recognized “Juneteenth” as a state holiday in 1980, and yet Texas was the first state to do so. This year, our Embassy team celebrated Juneteenth from different states across America and here in Rwanda. Juneteenth marks America’s progress toward achieving the ideals of our nation’s birth, those ideals of Life and Liberty enshrined in our Declaration of Independence.

It is long overdue, then, that we celebrate both the Independence Day of our country and the Freedom Day of our African American citizens from the tyranny of slavery.

Our Bill of Rights and other constitutional amendments have expanded the scope of the rights and ideals our founding fathers put to paper in 1776 to embrace women’s suffrage and civil rights for all Americans, including LGBTQ and peoples with disabilities.

And because of this course that we have charted as a country in the 244 years since our Independence, I believe in the words of our National Anthem that played just minutes ago. That one can say that the star-spangled banner does indeed yet wave “O’er the land of the free and the home of the brave.”

Let me reaffirm this point by concluding with the words of another freedom song that is popularly known as the Black National Anthem, “Lift Every Voice and Sing,” originally written in celebration of Abraham Lincoln’s birthday and now sung on every Juneteenth:

“We have come over a way that with tears has been watered,

We have come, treading the path through the blood of the slaughtered,

Out from the gloomy past,

‘Til now we stand at last

Where the white gleam of our bright star is cast.”