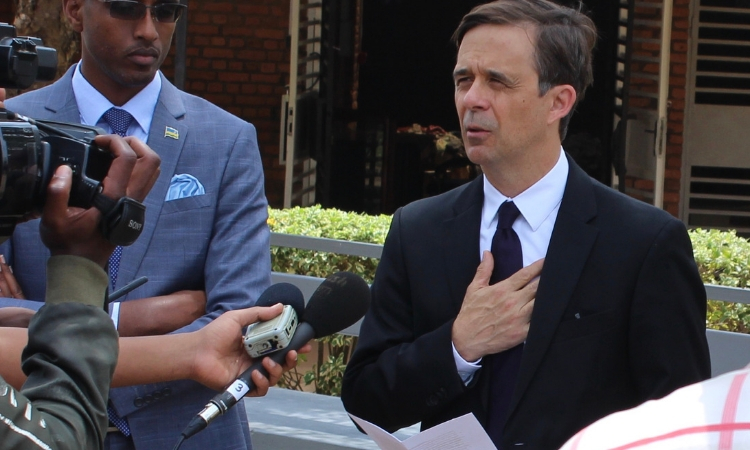 The U.S. Embassy is proud to announce the award of an additional USD $100,000 grant (approximately 88. million RWF) from the U.S. Ambassadors Fund for Cultural Preservation to the National Commission for the Fight against Genocide (CNLG).

This grant, which is the second phase of a partnership started in 2015, will be used for the conservation of ethnographic objects and traditional architecture at Nyamata Genocide Memorial.

The initial grant in 2015 of USD $87,000 (approximately 63.5 million RWF) helped connect CNLG with experts from the University of Pennsylvania’s School of Design Historic Preservation team. The collaboration provides training to local Rwandan experts in artifact and structural conservation at the memorial. While the Nyamata memorial site will most directly benefit, the training and preservation skills that will be acquired by Rwandan conservation experts will help them to protect other sites as well, providing a lasting contribution to the conservation of Rwanda’s historical and cultural heritage. The University’s “Pennsylvania Gazette” profiled the project in a fascinating December 2016 article.

Joined by CNLG Executive Secretary Dr. Jean Damascène Bizimana and the Mayor of Bugesera, U.S. Ambassador to Rwanda Peter Vrooman announced the grant at Nyamata Genocide Memorial Wednesdays in the presence of survivors of the massacre.

“We believe that the memory of what happened here in Nyamata and in so many other places around Rwanda must be preserved,” said Ambassador Peter Vrooman.  “We’re very proud to be able to contribute in a meaningful way to preserving the memory of the lives lost in the genocide.”

The grant is made possible through the U.S. Ambassadors Fund for Cultural Preservation, which supports the preservation of cultural sites, objects, and forms of traditional expression in more than 100 countries around the world.  Learn more at https://eca.state.gov/cultural-heritage-center/ambassadors-fund-cultural-preservation.