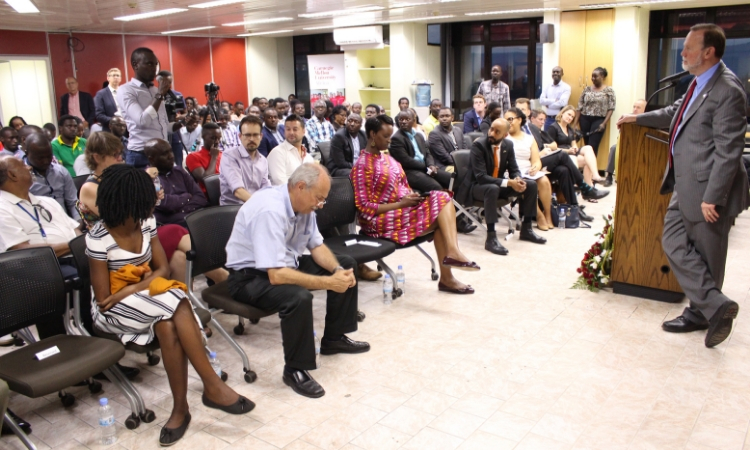 (Remarks as Prepared for Delivery)

Thank you for this wonderful welcome to Rwanda.  I spent most of my 32-year career as an American diplomat on this continent, and I was fortunate to serve in Ethiopia, Guinea, Nigeria, Cameroon, Togo, Zambia, and the Seychelles.  However, this is my first visit to Rwanda.  Having heard so many wonderful things about your country and its people, I knew this had to be one of my first stops when visiting Central Africa.  I am excited to be here to speak to you today about the enduring relationship between the United States and the countries of Africa, particularly Rwanda.

The world, especially Africa, has changed dramatically from when I became a diplomat in 1978.  When I first set foot on the continent, there were no cellphones, no internet, few television stations, and to call back to America required booking a call days ahead to reserve one of the few international lines.  Today, young Africans, and especially young Rwandans, are as wired and plugged in as any of their global counterparts.  They aspire to the same goals – a quality education, a well-paying job, a good house, and something left over to help their parents.  Through modern technology, even people in the villages now know how much Irish potatoes or goats will sell for in the urban markets, so they can get better prices for their products.

This trip is a phenomenal opportunity for me to engage with young people, such as yourselves.  I tell everyone I talk to, from heads of state, to reporters, business people, and civil society, that engaging Africa’s youth is the key to unlocking sustained prosperity on the continent.

With this in mind, I will highlight four key U.S. policy priorities in Africa:

First, the United States is interested in promoting stronger trade and business ties between Africa and America.  American companies are eager to invest in Africa.  They will bring technology, know-how and, above all, the desire to hire, train, and advance Africans into positions of responsibility.

However, to attract more business, African governments need to increase transparency and fairness in their respective commercial environments.  Investors seek a level playing field, predictable policies, and a dispute resolution process that follows the rule of law — not who pays the highest bribe.

Sadly, as we all know, some other countries investing in Africa have not been as interested in promoting a level playing field and will not speak out about corruption.

Despite these market hurdles, America remains the world leader in international brands and American technology and expertise is second to none.  I know that there is a tremendous appetite for American products and services here in Rwanda and on the continent.  Who here uses Facebook, Instagram, Twitter, or Google?  This is just a small sample of the depth and breadth of American companies that can help facilitate growth and connections in Africa.

Second, we must harness the potential of Africa’s tremendous youth population to drive Africa’s economic growth and create real prosperity.

Both during my first career as a diplomat and my second career in academia as Vice Provost for International Affairs at Texas Tech University, I had numerous interactions with students from Africa.  They were some of the brightest and most innovative students I have met anywhere.

The question to you is, “How do we harness that talent and entrepreneurial spirit of young Africans as a force for prosperity and stability?”

Third, it is critical that we strengthen our partnership to advance peace and security across the continent.  We do this through our defense and development partnerships with African governments as well as supporting regional mechanisms like the East African Community.

Fourth, I am here today to reinforce that America has an unwavering commitment to Africa.  Our relationship has evolved over decades to one of cooperation, mutual respect, and transparency.  No country in the world can match the depth of America’s long engagement in Africa in health, education, civil society and providing job skills, especially for women.

Perhaps nowhere is the strength and breadth of the U.S.-African partnership more evident than here in Rwanda.  We all know exactly how far Rwanda has come since 1994.  In the past 25 years, Rwanda has reimagined itself as a strong state that invests in good governance and the success of its people.  In many ways, Rwanda is demonstrating the true potential of Africa.

A success story, Rwanda is a good example of how an African nation can transform its business climate for the better.  The World Bank now ranks Rwanda as the second best place (after Mauritius) to do business in Africa in its Ease of Doing Business rankings.  Rwanda is also ranked 29th in the world (up 12 places since last year) in the same report – ahead of Spain, Japan, Italy, France and even Switzerland!  This is a truly remarkable achievement.

This improved business climate is creating opportunities for both young people and for American businesses to make a positive impact in Rwanda.  Since 2015, U.S. companies have announced more than $300 million in new investments in Rwanda, primarily focused on expanding access to energy, health, and clean water.

Culligan International is synonymous with clean water in the United States.  Its investment in Rwanda demonstrates the power of private sector to help meet development goals.  Culligan had such great trust in the Rwandan business environment that it self-financed 80 percent of the infrastructure cost of its first water treatment plant.  The company now brings safe drinking water to more than 1 million Rwandans.

Another good example is Zipline, a U.S. start-up on the cutting edge of a new technology: drone delivery of life-saving medical products.  Zipline’s drones have made more than 10,000 medical deliveries to date in Rwanda; about a third of those have been emergency deliveries where someone’s life was on the line.  Zipline has increased access to rare blood products by 175%.  It also reduced supply chain waste to effectively zero, and helped several hospitals eliminate maternal death due to postpartum hemorrhaging.

Our Embassy is working to encourage similar innovation and entrepreneurship within Rwandan small and medium sized enterprises.  Also, USAID’s Feed the Future program is unlocking millions of dollars’ worth of loans and private investment to grow Rwanda’s agribusiness sector.  We are bringing on board private Rwandan and American companies and investors, in partnership with government, to help Rwanda work toward self-reliance.

Building a better business climate that relies on investment and not aid is the surest path for Rwanda to achieve targets like the Vision 2050 goal of becoming an advanced economy within your lifetimes.  It will also help expand trade ties with the United States.  Bilateral trade between Rwanda and the United States has grown 300 percent over the last decade.  While we are pleased with similar growth around the region, this Administration wants to pursue a model Free Trade Agreement with a willing partner in sub-Saharan Africa to really unlock the vast economic potential.  Starting on a bilateral basis, we hope to have a network of free trade agreements in place in the coming years.  I believe Rwanda would make an excellent candidate as our first partner.

On my second priority, we have seen time and again that investing in education is the best way to invest in the future.  Nothing better illustrates the strength of the U.S.-Rwandan partnership in education than the establishment of Carnegie Mellon University’s (CMU) Africa presence in Rwanda.

CMU-Africa was born eight year ago out of a partnership between the Government of Rwanda and Carnegie Mellon University.  It remains to this day the only U.S. research university offering its Master’s degree with full-time operations in Africa.  The Government of Rwanda identified a critical shortage of high quality engineering talent required to accelerate development – not just in Rwanda, but across Africa.  Rwanda’s impressive investment in one of the most prestigious names in U.S. higher education will yield benefits for years to come. But we all know that a lot of learning takes place outside of the classroom.  The Department of State’s public diplomacy programs support hands-on learning and mentoring of the next generation of African leaders to enhance leadership skills, bolster entrepreneurship, and forge meaningful ties with U.S. counterparts.

The Young African Leaders Initiative (YALI) Mandela Fellows Program is at the forefront of our educational exchange programs.  Ange Imanishimwe, who joins us today, illustrates the power of this program.  After Ange was named Rwanda’s top young innovator in 2012, he used the prize money to establish an NGO focused on protecting the incredible wildlife in and around Rwanda’s Nyungwe National Park.  After a six week long Mandela Washington Fellowship in 2015, he had skills and vision to scale up and pursue his passion of showcasing the beauty of Rwanda.  Ange started Kitabi Ecolodge.  Not only does the rustic hilltop retreat generate revenue to support Ange’s original conservations goals, but it also now employs 18 of his neighbors and provides income generating opportunities for a thousand more.  I have heard rave reviews from Ambassador Vrooman who stayed there just last month.

And the private sector has an important role in education and training, as well.  Last week, I visited an Andela office in Kampala.  Andela is a U.S training and recruitment company that decided to enter the Rwandan market last year thanks to the country’s strong existing infrastructure, technological excellent, and ease of travel throughout the region.  Their goal for the first five years of operation in Rwanda is to train 500 to 1,000 world-class software developers and to employ them right here in Kigali.

But, an educated and innovative population is only possible with my third priority: advancing peace and stability.

I admire Rwanda for its outsized role in international peacekeeping.  Rwanda has contributed troops and police to UN missions in Sudan, South Sudan, the Central African Republic and Haiti.  Despite a relatively small population, Rwanda contributes the third-highest number of peacekeeping forces in support of international interventions under the auspices of the United Nations or the African Union.  As we say in America, “Rwanda punches well above its weight,” when it comes to peacekeeping around the world.  I am proud that the United States has been Rwanda’s largest partner, helping to train and equip thousands of Rwandan soldiers and police for these critical peacekeeping missions.

Finally, my fourth priority – our unwavering support of Africa – brings us full circle.  America’s partnership with Africa is based on transparency, mutual respect, and collaboration.  We go beyond simply investing in Africa, to investing in Africans.  So, too, in our relationship with Rwanda.

The United States deeply values its long-standing partnerships with African countries.  Across the continent, we face challenges together, from fighting corruption and combating terrorism, to helping African nations create healthier, better educated populations with greater opportunities for their citizens.

Through our programs like Power Africa, the President’s Malaria Initiative, Peace Corps, and our signature HIV/AIDS program, PEPFAR, we have walked side-by side with Africans for decades.  These programs have brought electricity to rural areas, countered the scourge of HIV/AIDS and malaria, and brought enthusiastic American volunteers to rural areas across Africa to focus on community-led health and education projects.

The U.S. Administration’s recently passed BUILD legislation, which doubled the U.S. government’s investment capital to $60 billion, offers Africa a U.S. alternative for foreign direct investment.  Not only will the U.S. government be able to make equity investments in Rwandan and other African companies, we hope to use these resources to unlock billions in private capital from the United States.

As one Rwandan proverb explains: “When people work together, God is on their side.”  Let us take this proverb to heart and work together to create a Rwanda of opportunity and prosperity; of hope and commitment; and of peace and stability, with a bright future for all of the people of this wonderful nation.

May God bless each of you.