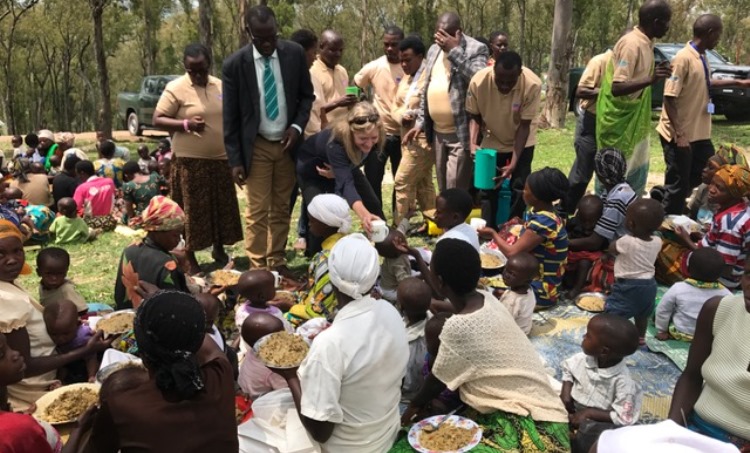 U.S. Ambassador to Rwanda Erica J. Barks-Ruggles visited Ruvugizo Village in Kinazi sector in Huye on December 5 to promote U.S. government-funded activities to combat malnutrition.  During her visit, the Ambassador observed Growth Monitoring Promotion activities conducted at the village level along with Positive Deviance Hearth activities, which focus on identifying good behaviors practiced by mothers and caretakers of well-nourished children.  The visit also allowed Ambassador Barks-Ruggles to participate in a Farmer Field School demonstration of kitchen gardens.  The Ambassador distributed garden and kitchen tools to community members and helped served a nutritious lunch to participating children.

The U.S. Embassy in Kigali awarded a $250,000 (RwF 210 million) grant to Francois-Xavier Bagnoud (FXB) Rwanda in September to improve nutritional behaviors as well as water sanitation and hygiene and to combat malnutrition in all 14 sectors of Huye.  The project is expected to assist 53,000 children under the age of five and 10,000 pregnant and lactating women.  It will also promote male engagement in the nutrition of their children.  The project started in Gishamvu sector in October and will be completed in 2019.

This program is part of the U.S. Government-wide approach to accelerate progress in nutrition.  Through USAID-funded programs, such as Community Health and Improved Nutrition and Feed the Future, the U.S. Government is helping strengthen and expand community-based nutrition programs to prevent undernutrition in young children and in pregnant and lactating women, as well as to promote agricultural productivity across Rwanda.