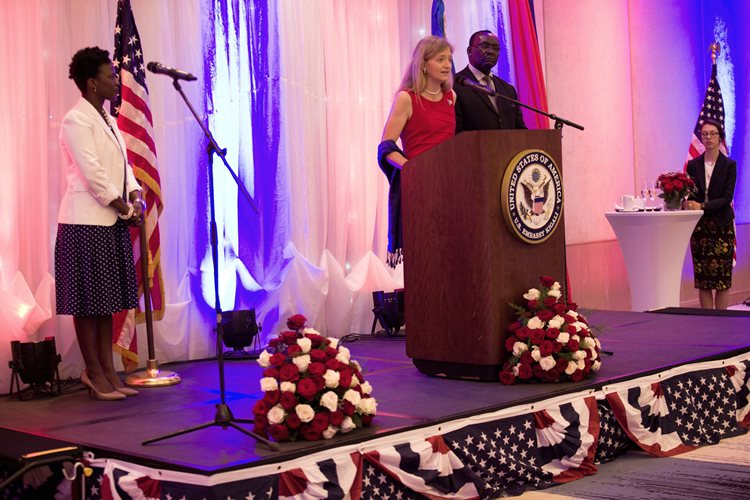 Thank you for joining us this evening to celebrate the 241st anniversary of the Independence of the United States of America.   I want to especially thank our guest of honor, The Honorable Minister Francois Kanimba for joining us in our celebrations this evening.

I want to recognize and thank you for sharing this celebration with us.  Your presence reminds me again of the strength of our friendship and partnership with Rwanda

Members of Parliament, Permanent Secretaries, other colleagues from the Government of Rwanda, my diplomatic colleagues, leaders in civil society, members of Rwanda Religious Leaders Forum, business, education, health, media and technology, and all the distinguished guests who are here tonight, thank you for taking time from your very busy schedules to be with us this evening.  And now, to use my favorite Rwandan phrase:  “All Protocol Observed.”

On behalf of the President, the Secretary of State, and the people of the United States – we thank you for your partnership, your friendship, and for being with us tonight to celebrate America’s Independence Day.

In the United States, the 4th of July – the date of our Declaration of Independence – is the day Americans gather together to celebrate our freedom and reaffirm our commitment to upholding the democratic principles laid out in our Declaration and in our Constitution that “We the people … hold these truths to be self-evident, that all men [and women] are created equal, and that they are endowed with certain inalienable rights, that among these are Life, Liberty and the Pursuit of Happiness.”

The 4th of July is not only special for America, but also for Rwanda as it is the anniversary of your liberation and the end of the genocide 23 years ago.  Our shared anniversary is symbolic of our shared values:  the belief that all human beings are valuable and created equal, that we all have the right to life, liberty and happiness, and that the power of government is vested in, and derived from, its people.

The United States is proud of our partnership with Rwanda to strengthen this region, to tackle the joint challenges we face, and to build a better future for both our countries. We have partnered for over a decade now supporting Rwanda’s deep commitment to peacekeeping efforts in some of the toughest conflicts in the world.  The United States has worked with the Rwanda Defence Force in peacekeeping training since 2004, when Rwanda first deployed to the peacekeeping mission in Darfur.  Since then, our partnership has continued to grow and we are pleased to currently be working together to increase capacity in logistics, engineering, medical services, and aviation to support rapid response to emerging crises in the region.

We also work together on economic growth and poverty reduction.  During the last six years, the United States has invested 163 million U.S. dollars to promote food security; improve nutritional status of women and children; and rehabilitate key infrastructure through USAID’s Feed the Future initiative. During the last year alone we trained a quarter million farmers on new farming techniques, and we fostered $66 million in new private sector investments in the Rwandan agriculture sector.

We are also proud of our growing trade and investment relationship with Rwanda.  Over the past year, the Embassy has supported new successful investments in the areas of water, communications, power, agriculture, and health.  U.S. companies are helping Rwanda tap its unique methane resources in Lake Kivu to power homes and factories.  They are providing tens of thousands of rooftop solar panels across the country.  They are on the frontlines of upgrading water treatment plants and supply lines.  And, they are also working hand-in-hand with coffee and tea growers to increase productivity and the quality of yields.  Some of you may have even noticed a U.S. company’s drones in the air over the past year supplying valuable blood and medical supplies.  By connecting U.S. investors and entrepreneurs to business opportunities here, we are working in partnership to fulfill Rwanda’s development goals while creating jobs on both sides of the Atlantic.

As many of you know we also have a long-term partnership to improve health and education.  Just last week, we celebrated the 15th anniversary of the Centers for Disease Control and Prevention’s partnership with Rwanda.  Over the last 15 years, their projects in coordination with the Rwandan Ministry of Health combined with the efforts of USAID and the President’s Emergency Fund for AIDS Relief, or PEPFAR, have put 175,000 people on lifesaving ARVs and reduced HIV transmission to newborns to two percent.  And on the education front, our Kinyarwanda literacy programs have put almost 11 million teaching and learning materials into every first, second and third grade classroom in this country over the last four years. Our three reading programs are working together to improve the reading skills of one million children by 2021.

I am proud of the challenges we have overcome together and happy to celebrate our joint achievements with all of you – our partners in these efforts.  I would like to pause just for a moment and applaud my wonderful team at the U.S. Embassy and each of you here present for your contributions to this enduring partnership.

Now, as you may have noticed when you entered this evening, you were greeted with a warm Hollywood welcome, as our theme tonight is American Cinema through the Ages.

We picked this theme not just because movies are fun, but because over the decades, Hollywood has tackled many of the loftiest concepts expressed in our Constitution and our Declaration of Independence — dramatizing them and making them resonant for millions in the United States and around the world.  American movies have used humor, drama, and fantasy to inspire us and make us consider more deeply the rights that are guaranteed in our constitution.  For example, movies like “9-to-5” compelled us to have a conversation about gender inequalities in the workplace.  It was produced at a time in the 1980s when American women were joining the workforce en masse.  With humor, the characters confronted sexual harassment and sexism and showed ways in which working conditions could be improved for women.  Many women identified with those characters and saw how they too could demand their rights.

Movies tell stories that transcend race, class, and gender in a way other art forms cannot.  The diversity of film subjects and genres allows all voices to be represented and provides a peek into the lives of “others” – ordinary people with whom we share more similarities than differences.  Movies allow us to go back in time and understand how far we have come on some social issues—and how far we have yet to go on others.  They make us face, and hopefully be more humble about, some of the horrible wrongs in our past.  Twelve Years a Slave reminded us of the brutality and inhumanity of the slave trade in our country and the continued problem of racism today.  The movie Philadelphia confronted homophobia and stigma for HIV+ people, and opened a space for the discussion about sexual identity and human rights.  Movies at their best can make us think deeply about how to confront and stop hate and unite.

Movies also can inspire future generations.  Hidden Figures, which was nominated for Best Picture last year, brought to light for the first time the true story of the pioneering African American women mathematicians, computer and technical engineers at NASA, and demonstrated for today’s young women that they, too, can—and should—play an important role in the scientific and technological development of their countries.  Likewise, the Queen of Kwete explored the real life story of Phiona Mutesi, a Ugandan girl who learned to play chess and became a Woman Candidate Master after her performances at the World Chess Olympiads.  Her story shows that greatness can be found in every corner of the world, even the impoverished neighborhoods of Uganda.

Whether it’s confronting tyrants abroad, speaking truth to power at home, or pushing the limits—and buttons—of our society’s tolerance and cultural understanding, motion pictures often dare to say the unspeakable.  Movies like The Great Dictator in which Charlie Chaplin created cinema’s first important political satire mocking Adolf Hitler.  During the horrors of the Second World War, Chaplin reminded us of our humanity when he used the closing scenes to make an impassioned plea for brotherhood and goodwill.

Films also remind us that a healthy skepticism of political and institutional authority is warranted.  All the Kings Men depicted the fictional descent of a man into the mire of political corruption and showed how such corruption, when it goes unchecked, destroys a city and eventually a nation.  Likewise, All the President’s Men, reminded us of the power of a free press, and how journalists helped save our nation from the corruption of the Watergate scandal.

Movies matter because of the human emotions they excite: they entertain, they frighten, they comfort, they amuse and educate.  They also elevate and enrich the cultural landscape; they bring us diversity of opinion and experience.  Movies reflect the experience of building our country and our democracy.

America’s history of democracy is rich; it is also messy.  You only have to watch our movies – and our news – to know that.  But that same “messiness”, the complexity and diversity of opinion that are very much on display, is also our country’s greatest strength.  It means that every citizen has the ability to question and confront our elected officials.  It means all citizens have the right to access the democratic process – without barrier – to vote or run for elected office.  It means that our elected officials, and the leaders they appoint, are accountable to the public.  It means that journalists can demand transparency and accountability, and write critical, controversial, and satirical press pieces without fear.

The film clips and posters on display tonight highlight both bright and not so bright spots in our country’s rich and messy democracy.  They highlight the diversity and creativity that make America the country it is today, 241 years after its founding.  Over the course of the evening, I invite you to visit the various displays to see the stories of American life and values as told by our films.

And now, I would like to propose a toast:

Please raise your glass with me in celebration of the 241st anniversary of American Independence.  We celebrate our Independence Day in the company of our Rwandan friends and partners as they celebrate their Liberation Day.  We are proud to work with you every day to build a more prosperous, democratic, and peaceful future for both our countries.  Cheers.

I am now honored to invite the Honorable Minister Francois Kanimba, to the podium to give his remarks.