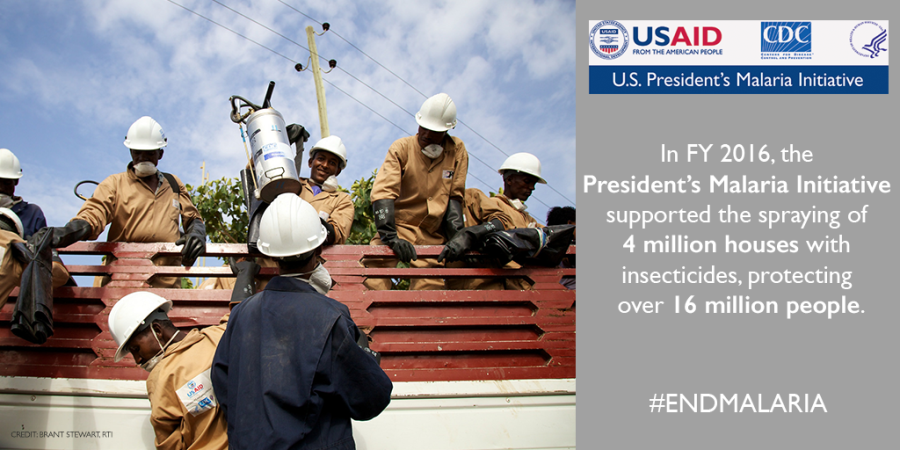 Today is World Malaria Day, a time to celebrate all of the progress we’ve made in fighting this deadly disease, and an opportunity to recommit ourselves to eliminating it once and for all.

Since 2000, the global fight against malaria has taken a truly historic turn. The World Health Organization estimates that in the past 17 years more than 7 million deaths from malaria were averted worldwide. Most of the lives saved were children under five years old in sub-Saharan African countries, such as in Rwanda.

Since 2000, Rwanda has cut the mortality rate of children under five by an astonishing two-thirds. Much of this impressive achievement is due to reducing deaths from malaria.

As the world’s leading donor in improving global health, the U.S. Government has shown an unwavering commitment to ending the scourge of malaria. This is particularly true since the launch of the U.S. President’s Malaria Initiative in 2005.

The U.S. President’s Malaria Initiative operates in 19 countries across sub-Saharan Africa with the highest burden of malaria, including Rwanda. The initiative is led by the U.S. Agency for International Development (USAID), and implemented together with the U.S. Centers for Disease Control and Prevention (CDC).

As a result of this initiative’s support, hundreds of millions of people around the world have benefited from protective measures against malaria, and hundreds of millions more have been diagnosed and treated for malaria. In Rwanda, the U.S. Government works in partnership with the Ministry of Health, the national malaria control program, partners, and communities to aggressively press for eradication of malarial deaths.

Together with our partners we are ensuring that insecticide-treated bed nets are delivered to households, and that families, including vulnerable expectant mothers and their newborns, are protected from malaria. Working together, we are supporting Rwanda’s efforts to ensure that every suspected malaria case is tested, and confirmed cases of malaria are treated promptly.

Last year alone, the U.S. Government partnered with the Government of Rwanda to support the spraying of over 800,000 homes with safe insecticides. We also purchased over 1 million insecticide treated nets, which were distributed as a part of a national campaign to protect every Rwandan from malaria. And perhaps most important of all, we procured over 600,000 doses of malaria drugs, called artemisinin based combination therapy, which will save the lives of untold thousands.

The United States is also deeply invested in supporting Rwandans as they lead the fight against malaria. To do this, we are supporting capacity building across the health sector; from the procurement and management of malaria drugs to training community health workers.

Yet, despite all the progress we’ve made together in the fight against malaria, there’s still so much more to do.

About half of the world’s population still lives at risk of being bitten by malaria-infected mosquitoes. And sub-Saharan Africa is still home to 90 percent of malaria cases and 92 percent of malaria deaths. Despite all our progress, this year alone malaria will kill more than 400,000 people.

Finishing this fight and beating malaria is not just the right thing to do. It’s also one of the best investments we can make in the future.

Halting each new case of malaria helps eradicate extreme poverty. That’s because when children and adults are infected with malaria, sick farmers are unable to work their fields and unwell kids are unable to attend class. Less malaria means fewer days missed at school and work, and more productive communities.

In fact, experts estimate an astonishing 60 RWF return for every one RWF invested in fighting malaria in sub-Saharan Africa. You’ll be hard pressed to find a better yielding investment anywhere in the world.

Today I also want to celebrate World Malaria Day by acknowledging my colleagues and counterparts in the Government of Rwanda, who work tirelessly in the fight against malaria every day. Your hard work and unflagging dedication is saving lives and ensuring the health of so many across this wonderful country.

As we look to do more, we must also look beyond government and donor resources.  We need innovative approaches to financing the fight against malaria, and increased engagement with the private sector. This is why today, on World Malaria Day, I call on all partners, businesses, and communities involved in combatting malaria in Rwanda, and worldwide, to redouble our efforts.

By mobilizing more resources, reaching out to the private sector, and scaling up our life-saving interventions, we will not just cement the fantastic progress we have already made, but will make progress towards a future where malaria is but a distant memory.