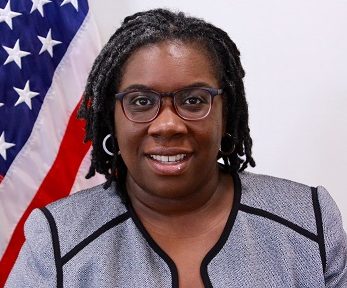 Belinda Jackson Farrier entered the Foreign Service in 2002.  She is a Public Diplomacy-coned officer and she previously served overseas in El Salvador, Togo, and Peru.  She also completed temporary assignments in Cuba, Ghana, and Ecuador.  In Washington, Belinda served as Desk Officer for Kuwait and Bahrain in the Bureau of Near Eastern Affairs, Media Relations Officer in the Bureau of Public Affairs, and Special Assistant in the Office of the Special Representative for Afghanistan and Pakistan.  Belinda has worked in various capacities in the Department of State’s Operations Center, first as a Watch Officer, later as a Senior Watch Officer, and finally as Deputy Director for the Watch. She also served a tour as a Duty Officer in the White House Situation Room.

During her career, Belinda has earned various awards and distinctions during her career, including Superior and Meritorious Honor awards.  She represented the Department of State as part of the 2018-19 International Women’s Forum Leadership Foundation Fellowship.  Belinda is also a former Department of State Thomas R. Pickering Fellow.  Prior to joining State, she earned a B.A in Political Science from Spelman College and an M.A. in International Relations from the Maxwell School of Citizenship and Public Affairs at Syracuse University.  She has studied Japanese, French, and Spanish.  She is married to Michael Farrier.  They have one daughter.