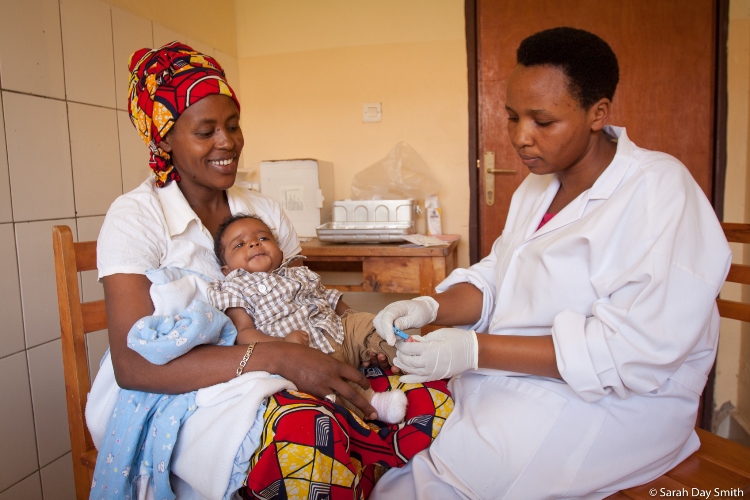 Jacqueline is an HIV-positive Rwandan woman who is married with three children – all HIV free. However, this is not Jacqueline’s first family.  When she was still in secondary school, she married and gave birth to two children.  After a few years, both children died, followed by their father.  Jacqueline was devastated to have lost her entire family and never knew the cause of this tragedy but assumed it was normal illness.  Because she had been married at such a young age and had not completed her studies, Jacqueline decided to go back to school to finish her degree.  She assumed a normal life, fell in love, and eventually became pregnant.  When she went to the health center for a pregnancy test, she was also told for the first time that she was HIV positive.

Pregnant women like Jacqueline infected with HIV are at high risk of transmitting HIV to their infants during pregnancy, during birth, or through breastfeeding. However, the Rwandan Ministry of Health, with technical support from the United States’ Centers for Disease Control and Prevention (CDC) in Rwanda, is working to eliminate new HIV infections among children in Rwanda through the Prevention of Mother to Child Transmission (PMTCT) initiative. PTMTC is an intervention that works to insure no child is born with HIV. PMTCT programs provide a package of services that include counseling and testing for pregnant women, antiretroviral (ARV) treatment to prevent mother-to-child transmission, counseling and support for safe infant feeding practices, and family planning counseling. This program is an essential step to ensuring an AIDS free generation.  By the end of FY16, 4,152 HIV-positive pregnant women received ARVs through PEPFAR support to reduce the risk of MTCT during pregnancy and delivery; therefore, 97% of all pregnant women (out of the 4,263 HIV-positive pregnant women) received ART through PEPFAR support in Rwanda.  Jacqueline was one of these women.

After receiving news of her HIV status, Jacqueline says “it was hard for me to take in, and I also realized that it was the cause of the past tragedy I had experienced. But the doctors comforted me and convinced me that there was still a life for me… They recreated hope in me… They educated me about how I would protect my baby from HIV; that is when I started taking [ARV] medication and my husband accepted me and we kept living together.”

Jacqueline’s eldest son with her second husband grew up healthy and HIV negative, and he is now fifteen years old and in secondary school. When their first-born was eight years old they decided to have another baby. After he was born they continued to come to the health center for tests and follow-up visits; now at the age of seven, he too is HIV negative, as is his father. They had not planned to have any more children, but in 2015, Jacqueline found out she was pregnant again, and delivered their third son in late March 2016. Jacqueline and her family are one of many PMTCT success stories in Rwanda, due to practicing multiple effective PMTCT strategies promoted by PEPFAR: Jacqueline taking and remaining on ARVs prior to and throughout pregnancy and breastfeeding of all three children; delivering each child via cesarean section; and their youngest son receiving HIV medicine to reduce the risk of infection from any HIV that may have entered his body during childbirth. At PEPFAR/CDC-supported sites in Rwanda, 99% of infants born to HIV-positive mothers were HIV-negative at 18 months (4,174 out of 4,219).

Jacqueline says that since her first family perished due to HIV, “having an HIV negative family empowers me a lot. It has also helped me stay healthy and take care of myself, which is why am still alive today. That is the reason of my appreciation to the government for helping us get the medication and also the sponsors who help us get this medication.  In the beginning I had no hope, but today I have realized that medication can help me stay alive and healthy.”