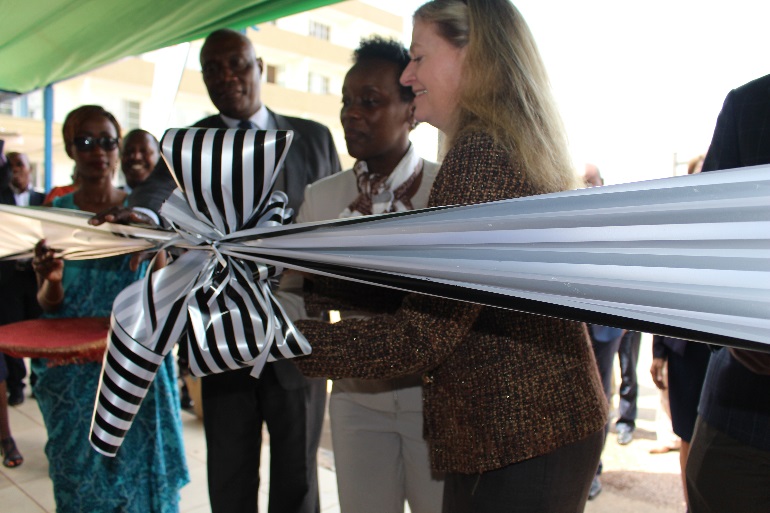 On February 10th, 2017 at a ceremony co-officiated by U.S. Ambassador to Rwanda, Erica Barks-Ruggles; Hon. Minister for Health, Dr. Diane Gashumba; and Africa Society of Blood Transfusion (AfSBT) President of the Board of Governors, Dr. Gabriel Muyinda; Rwanda’s National Center for Blood Transfusion (NCBT) has awarded the highest – Level 3 – international standards accreditation by AfSBT. This tremendous achievement means NCBT is now an internationally recognized regional center of excellence in blood transfusion practice, able to offer blood transfusion medicine and technical expertise services to neighboring countries as needed. It also marks a milestone in Rwanda’s HIV prevention through blood safety strategy. Dr. Swaibu Gatare, Division Manager of NCBT says, “We could not have done it without the support of PEPFAR and the Centers for Disease Control and Prevention (CDC) Rwanda”.

AfSBT is the continental  body that acknowledges  attainment of  international standards,  recognizing blood banks  as centers of  excellence, in Africa.  Institutions seeking  international standards  accreditation through  AfSBT go through a  three step certification  process from Level 1  through to Level 3.  Rwanda becomes the  second country in Africa after Namibia to achieve this highest level of AfSBT accreditation. AfSBT has also identified Rwanda’s NCBT as its Regional Center of Excellence in Blood Banking, making NCBT/RBC an AfSBT Regional Collaborating Center for regional training.

The NCBT story is one of Rwanda’s many public health success stories. However, the path to this success has not been easy. The USG through CDC with funding from PEPFAR has helped transform NCBT by enhancing and expanding capacity as a core activity in HIV prevention. After the 1994 genocide and prior to 2005, without a national blood policy and guidelines, Rwanda experienced perennial blood shortages, lack of testing reagents and cold chain equipment. In addition an inadequate blood transportation system from mobile collections centers and an insufficient blood production limited geographic distribution and access to safe blood. As Rwanda rebuilt its institutions and focused on national efforts to prevent HIV transmission, safe blood became a central strategy, yet faced vast limitations due to lack of capacity and resources. The law establishing Centre National de Transfusion Sanguine (CNTS), later renamed National Center for Blood Transfusion (NCBT) facilitated mechanisms for resource mobilization for the Ministry of Health. Through Government of Rwanda (GoR) partnerships with international donors NCBT received funding and capacity building support. The USG, through CDC has offered technical support NCBT since 2002 and has received given close to $23 million dollars towards NCBT’s capacity building through PEPFAR since 2004. This support has helped transform NCBT into a nationwide institution with four fully functional state of the art regional blood collection centers (RCBT). This has greatly improved geographical access to safe blood in all the five provinces with the main headquarters and laboratories in Kigali City.

Through this  support NCBT was  able to be  transformed from a  small family  donation unit  focusing on district  level service  delivery, into a  nationwide  institution, with four  fully functional state-of-the-art RCBTs, each getting blood from voluntary, unpaid donors.

Quality assurance is maintained at the regional centers though their connection to the main central testing laboratory located at the Rwanda Biomedical Centre (RBC) in Kigali city. With these new quality standards now in place NCBT applied for, and received, Level 1 accreditation from AfSBT in 2013. In 2014 AfSBT awarded NCBT Level 2 accreditation and now in 2016, NCBT has attained AfSBT’s highest, Level 3 international standards accreditation.

Was this easy?  No, not at all.  NCBT had to  contend with a  decrease in donor  funding during the  accreditation  process. This was  particularly difficult  as at the time over  90% of NCBT’s  budget was donor supported. However, NCBT’s management and staff did a tremendous job throughout the process.

Dr. Gatare says, “The secret to achieving this milestone can be attributed to senior management involvement, self-motivated staff and the determination to excel”.

The determination of NCBT’s management and staff to attain this accreditation level is evident in their sustained standard of excellence.  No cases of transfusion-transmitted infections have been reported in Rwanda since 2013 when NCBT received Level 1 accreditation from Africa Society for Blood Transfusion.  These high standards of blood safety in Rwanda have resulted in a marked decline in the rate of HIV transmission among blood donors – from an HIV transmission rate of 1.6% in 2000 to 0.9% in 2015 and 0.6% in 2016.  This is a remarkable achievement, for which NCBT deserves applause.

NCBT now faces the challenge of sustaining these high standards. Despite their exemplary performance funding for blood safety in Rwanda has continued to decrease. This presents a challenge to NCBT’s efforts to sustain its Level 3 accreditation status.

Dr. Gatare says it best, “As we all know, quality is not a destination but a journey. Level 3 has been achieved but in 3 years a reassessment will be carried out to ensure that we are still maintaining the same level of excellence. We hope that the attainment of this Level 3 standard will increase confidence from our stakeholders and donor community to support HIV prevention through safe blood strategies in Rwanda”.

The success of NCBT lies in its key activities that include blood donor mobilization and recruitment of volunteer non remunerated donors, blood testing and processing, storage and distribution. NCBT ensures 100% screening of all blood donated for transfusion transmissible infections (TTIs) that include HIV, hepatitis B/C and syphilis. The most vulnerable groups necessitating blood transfusion are mothers during delivery, neonates, children under five years and expectant mothers with infections such as malaria and trauma patients. NCBT’s mission is to provide safe, adequate and effective blood and blood products to all patients in need. The screening contributes significantly to reduction in TTIs thus protecting blood recipients from passively acquiring these infections.

The USG is a proud partner of NCBT and its legacy of giving a vital service to the people of Rwanda; quietly saving lives and preventing HIV, HBV, HCV and syphilis infections to vulnerable blood recipients.