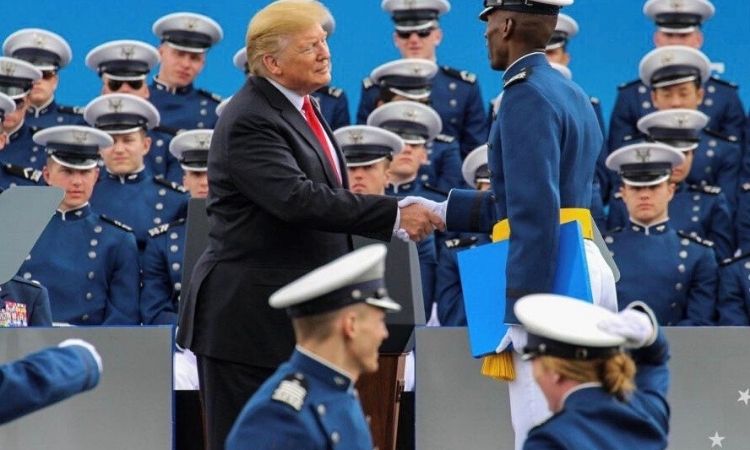 President Donald Trump with Olivier Mutabazi, one of the 2019 graduates of U.S. Air Force Academy.

Kigali – The number of Rwanda students attending U.S. colleges and universities hit an all-time high during the 2018-19 academic year, according to new data released this week. The 2019 Open Doors Report, released by EducationUSA as part of International Education Week, notes 1,292 Rwandan students in the United States last academic year, a 4.9 percent increase over the previous year.

According to the Open Doors Report, in the 2018/19 academic year, 69.3 percent of Rwandan students in the United States were pursuing undergraduate programs, while the remaining 30.6 percent were either pursuing graduate programs or completing post-graduation internships (practica). The states that welcome the most Rwandan students include Nebraska, Texas, New York, Arkansas, and Massachusetts.

For a second consecutive year, the United States tops the list of the five countries that received most Rwandan students, followed by DR Congo, France, Canada, and India, per UNESCO.

Open Doors historical data from 1951 to 2019 indicates that the first Rwandan student to study at a U.S. higher education institution enrolled in the 1961/62 academic year.

The United States is home to more than 4,500 accredited higher education institutions including community colleges, public, and private colleges and universities which provide a world-class range of education options for students from around the world.

To learn more about the 2019 Open Doors Report on International Educational Exchange, please go to the IIE website: https://www.iie.org/opendoors or email inquiries to press@iie.org.

To learn more about opportunities to study in the United States, please contact EducationUSAKigali@state.gov.