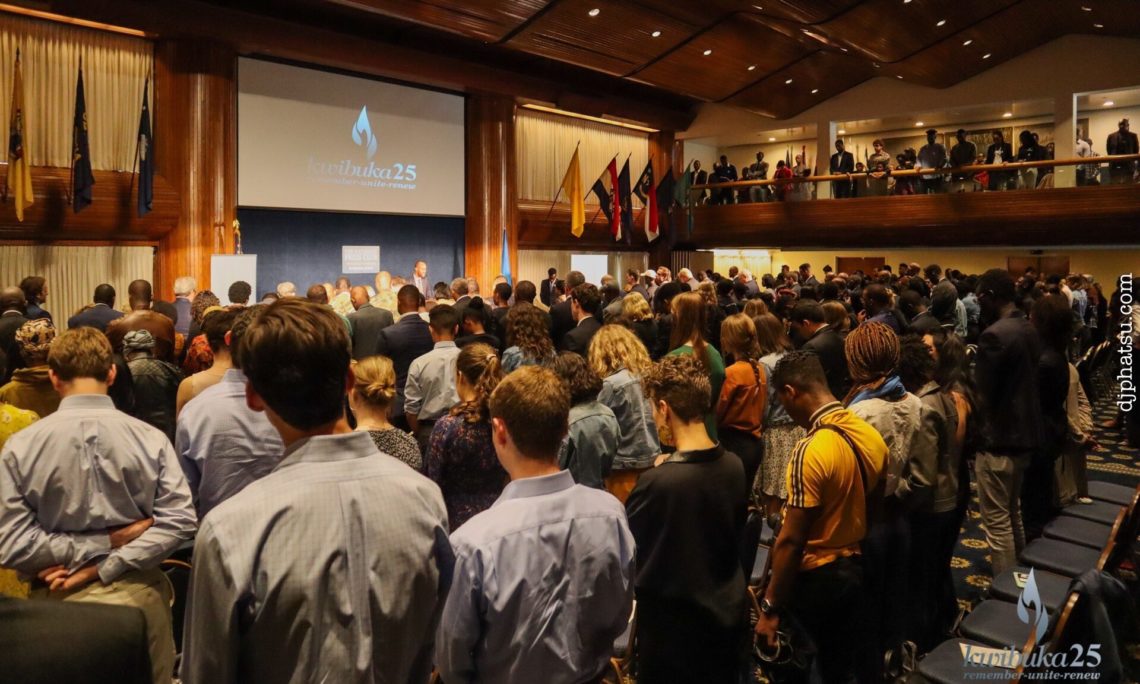 It is an honor and a privilege to be here with you this afternoon, both in my personal capacity and as the representative of the Government of the United States of America on this solemn occasion.

What brings us together is one of the darkest moments in our common history as humankind, the start of the genocide in Rwanda exactly twenty-five years ago today. Kwibuka the name given to this annual commemoration in the Kinyarwanda language is also an imperative, especially as we reach this quarter-century milestone: Remember!

The people of the United States of America join their Rwandan friends—and, indeed, all men and women of good will—in recalling the tragic events that unfolded over the course of the one hundred days that followed. We remember the hundreds of thousands of Rwandans who lost their lives, the men, women, and children systematically slaughtered—in many cases by their own neighbors—because of a genocidal regime’s organized and intentional campaign of violence against the Tutsi population.

But even as we remember those who died and, extending our heartfelt sympathy to those who lost family and other loved ones, as we stand in solidarity with those who survive and support their continued quest for justice to hold the perpetrators of atrocities accountable, the call to remember should also fill us with a sense of hope as well as sorrow.

We also remember that out of the ashes came the rise of the Rwanda we know today. In the wake of the genocide, when most of the world so-called experts had written the country off, the strength, resilience, and indomitable will of the Rwandan people proved them all wrong. The same fighting spirit that enabled Rwandans to end the slaughter themselves by overcoming the killers, has also produced the veritable miracle we have all witnessed over the course of the last twenty-five years. One could go on and on with the list of achievements that deserve to be remembered:

“Unite” is the second part of the theme of this year’s commemoration. If the international solidarity with Rwandans in their hour of need twenty-five years ago was not what it should have been, the same cannot be said of Rwanda’s solidarity with those who, in subsequent years, have found themselves caught up in conflict. As the U.S. National Security Advisor Ambassador John Bolton noted in announcing the Trump Administration’s new Africa Strategy: “Our goal is for the nations of the region to take ownership over peace and security in their own neighborhood.” As of the end of February of this year, Rwanda is the third-largest contributor worldwide of military and police forces to United Nations peacekeeping operations. We cannot but salute this extraordinary turnaround of Rwanda from a country ripped apart by violence and atrocities to a provider of protection for civilian populations elsewhere, including even in the western hemisphere where 146 Rwanda police are currently deployed as part of the UN mission in Haiti currently headed by my good friend Ambassador Helen La Lime, former U.S. Ambassador to Mozambique and to Angola.

That Rwanda’s leadership is increasingly recognized across Africa and the world is attested to by the recently concluded term of President Paul Kagame as Chairperson of the African Union, a tenure that was marked by a serious effort to reform the Pan-African organization and render it more effective in meeting today’s challenges, as well as the start just earlier this year of former Foreign Minister Louise Mushikiwabo’s service as Secretary-General of the Organisation internationale de la Francophonie.

Which brings me to the final part of the theme for Kwibuka 2019: “Renew.” The United States of America is proud to stand with Rwanda as together we face both the challenges and the opportunities of this moment in history.

Last month in a speech during his visit to Kigali, Assistant Secretary of State for African Affairs Tibor Nagy, reaffirmed America’s “unwavering commitment to Africa” and to a relationship based on “cooperation, mutual respect, and transparency,” noting that “Perhaps nowhere is the strength and breadth of the U.S.-African partnership more evident than here in Rwanda.”

On this solemn anniversary, we, the government and people of the United States, renew both our solidarity with Rwanda and Rwandans as mourn all the pain suffered and all the lives lost beginning twenty-five years ago today. At the same time, the greatest homage we can pay to the victims is to stand together and renew our pledge that, by God’s grace and our common will, that we will never forget—much less deny!—the terrible deeds that occurred, lest such a crime against the Creator and against humankind created in his image and likeness again stain the earth. Ibibi byabaye, ntibizongere kuba ukundi… Never again shall such evil arise, never again.

Thank you very much.