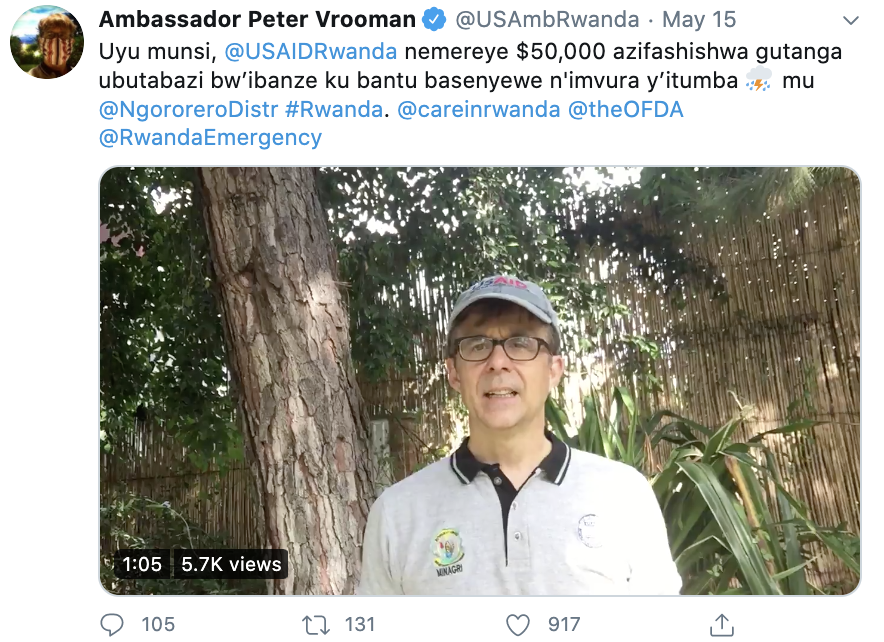 KIGALI – On May 12, 2020, U.S. Ambassador to Rwanda Peter Vrooman authorized over 47 million RWF for immediate emergency response to destruction caused by heavy rain storms. The relief funds, funded by USAID’s Office of Foreign Disaster Assistance, will aid families with needs identified by the Government of Rwanda’s Ministry in charge of Emergency Management (MINEMA). The aid was provided to CARE International in Rwanda (CARE Rwanda) to provide emergency relief supplies to households affected most by floods and heavy rains in Ngororero district.  These supplies include items such as sleeping mats, saucepans, blankets, mosquito nets, mattresses for pregnant women, jerrycans and hygiene products. In accordance with  COVID-19 preparedness, CARE Rwanda staff will follow all Ministry of Health guidelines, including wearing masks and appropriate protective clothing for the delivery of the relief supplies.

The start of Rwanda’s first rainy season has been marked by heavy rain storms that have caused flooding, the destruction of housing, crops, bridges, and loss of life.  According to MINEMA at least 113 people were killed and over 2,000 houses had been destroyed or damaged since the beginning of April. Damage also affected roads, bridges, livestock, water supply lines, and electrical lines. As of May 8, MINEMA estimates that tens of thousands of people have been directly and indirectly impacted by the above-average rainfall and resultant floods and landslides.

Given the strong partnership between the United States and the Government of Rwanda and its people, and the impact of this disaster on Rwanda, U.S. Ambassador Peter Vrooman is pleased to make available U.S. Government resources to assist the emergency response.