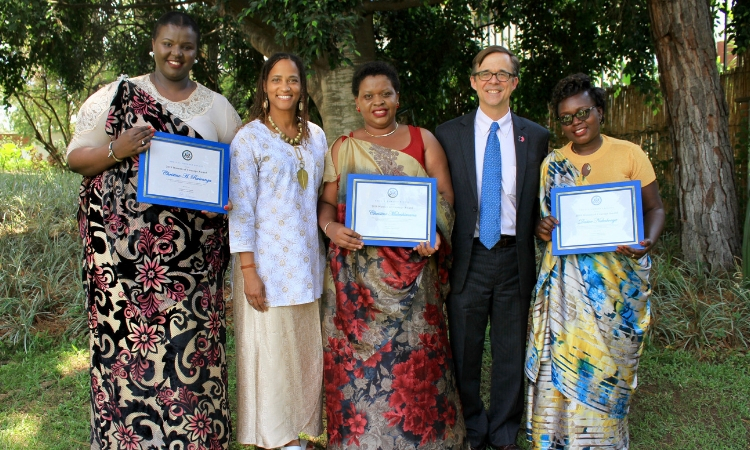 The U.S. Ambassador to Rwanda, Peter Vrooman, honored three Rwandan women today with the 2019 Rwandan Women of Courage award at an event at his home in celebration of Women’s History Month.  The three women — Christine Ashimwe, Dative Nakabonye, and Christine Mukeshimana — were selected from more than 2,000 nominations submitted by members of the community and followers of the U.S. Embassy Facebook page.

Christine Ashimwe is a health advocate, girl-child mentor and motivational speaker. She holds a Bachelor’s degree in Life Sciences focusing on Environmental Science from Cadi Ayyad University in Marrakech, Morocco; a Postgraduate Diploma in Gender and Development from the University of Rwanda’s Center for Gender Studies; and she is currently pursuing a Master’s degree in Global Health Delivery at the University of Global Health Equity (UGHE). She is the Founder and Executive Director of Rwanda Clot Awareness Network (RCAN). Christine founded RCAN in March 2016 after suffering from blood clots in her right leg and both lungs. Although she suffered from recurrent blood clots in her lungs and brain, this did not stop her from educating others about thrombosis (blood clots). In October 2018, Christine was named the “World Thrombosis Day Inaugural Thrombosis Ambassador of the Year 2018.” She is a mother of three daughters and is passionate about thrombosis education and advocacy, most especially for pregnant women because she believes that no woman should die while giving birth. Christine resides with her family in Kigali.

Dative Nakabonye is the director and founder of “Family Circle Love Lab Organization” (FCLLO), a Rwandan NGO that offers compassion and innovation to vulnerable groups. Dative and her organization support women from rural areas who are victims of domestic abuse and sexual violence to overcome trauma and become empowered. Dative is well-known through her organization, which has become a valuable learning ground for students, interns, and researchers from different countries. She holds an Advanced Diploma in Mental Health Nursing, a Bachelor’s degree in Peacebuilding and Development, and a Master’s degree in Development Studies. She is also member of National Forum Against domestic Violence (NFADV). Dative lives by a commitment to the belief that “supporting a woman is supporting the entire community.”

Christine Mukeshimana is a mother of two children with a passion for working with vulnerable women and children. In 2009, Christine struggled to find resources and answers to her questions, so she founded a community center entitled Help for Disabled and Vulnerable Children (HDVC). Since then, many families have benefited from her organization and leadership of the center. Christine is also an active member of the Forum for African Women educationalists (FAWE) and Organization des Medecins du Sport (ORDEMES). Christine has earned Bachelor’s degrees in Physiotherapy and Social Sciences.

In the first four years of the program, 13 women of courage have been recognized by the U.S. Ambassador to Rwanda. They include last year’s awardees: Leonne Laura Uwizihiwe, teacher and advocate for gender equality; Vanessa Bahati, founder of the Jordan Foundation; and Esperence Gasore, nurse and founder of Rwanda Children.

In 2016, the awards were presented to Agnes Twagiramaliya, teacher in Nyamagabe; Ms. Zulfat Mukarubega, founder of the University of Tourism, Technology and Business Studies (former RTUC); and Jeanne d’Arc Girubuntu, the only woman on Rwanda’s national cycling team.

The first women to earn the recognition in 2015 were Chantal Ingabire, leader of more than twenty lawyers, investigators, and social workers at International Justice Mission; Jeanne Mwiriliza, founder of Tubahumurize Association; Liberatha Mukasine, who overcame the loss of her husband and three children in 1994 to become a successful cassava farmer in Ruhango district; and Xaverine Mukamunana, founder of Jyamubandimwana Association.

The U.S. Embassy congratulates these women of courage, past and present, on their great work and commitment to serve the community.