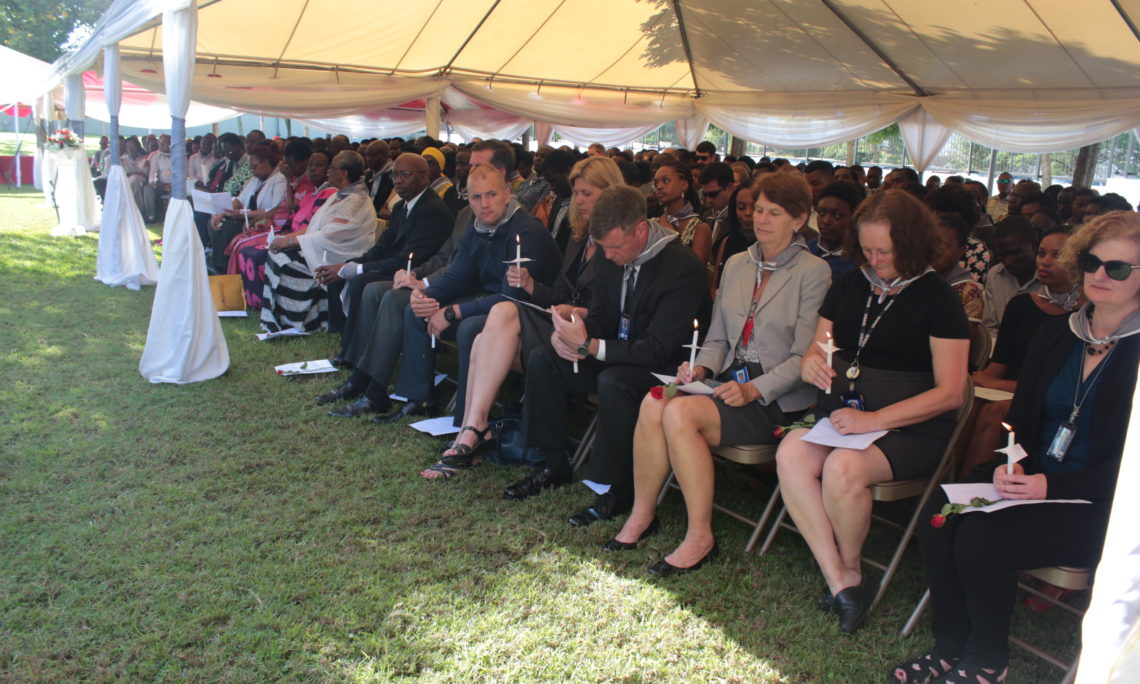 U.S. Mission in Kigali Remembers 25 Mission employees who lost their lives during the 1994 genocide.

The local employees’ association of the U.S. Mission in Kigali held a memorial ceremony on Wednesday, April 13 and a Walk to Remember on Friday, April 15 to honor the 25 Mission employees who lost their lives during the 1994 genocide.

Rwandan employees of the U.S. Department of State, USAID, Centers for Disease Control (CDC), the Department of Defense and the Peace Corps were joined in attendance by Ambassador Erica Barks-Ruggles and American officials from the U.S. Embassy in Rwanda.  Surviving members of the victims’ families joined the mission community for the ceremony.

In 2001, the U.S. Embassy in Kigali hosted the first commemoration ceremony for employees who lost their lives in the 1994 genocide.  At these, our 16th commemoration events, Ambassador Barks-Ruggles was joined by Executive Secretary of the National Commission to Fight Genocide ideology, Dr. Bizimana Jean Damascene as well as by representatives of the Muslim and Christian faiths.  The Ambassador, along with surviving family members laid wreaths at the memorial plaque in remembrance of the 25 U.S. Mission employees who perished.  The Walk to Remember brought together members of the mission community in a memorial walk from the Embassy to Kigali Memorial Center in Gisozi, where officials laid a wreath in remembrance.

The memorial plaque on the Embassy grounds was unveiled in 2007, to honor and keep alive the memories of our colleagues. As Executive Secretary of the Rwandan National Commission
against Genocide Jean de Dieu Mucyo said last year, the U.S. Embassy was the first institution to dedicate a plaque in honor of its employees who lost their lives in the genocide.

In 2005, embassy employees created a Genocide Orphans Fund (GOF) to assist orphans with their school fees through their graduation from university.  Several have already graduated from university, while others still benefit from this fund.  At the 2015 commemoration the Local Staff produced a book which included testimonies of genocide survivors of our fellow employees.

US MISSION TO RWANDA, KIGALI

EMPLOYEES KILLED DURING THE 1994 GENOCIDE

WE SHALL NEVER FORGET YOU