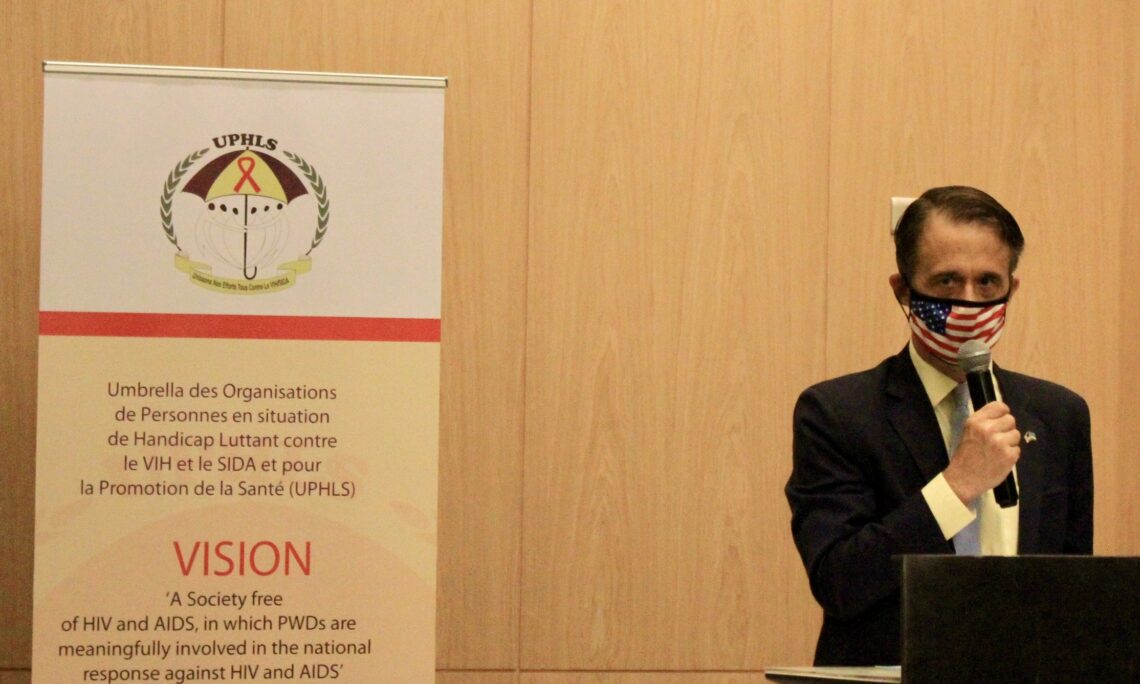 KIGALI (September 28, 2021) — The United States is committed working with the people and Government of Rwanda to combat HIV/AIDS in Rwanda and to support the inclusion of people with disabilities in all aspects of society.  Today, Ambassador of the United States to the Republic of Rwanda Peter Vrooman participated at a forum to raise awareness about inclusion of people with disabilities in HIV/AIDS response as part of the U.S. President’s Emergency Plan for AIDS Relief (PEPFAR) efforts.  The half-day forum, organized by the Umbrella of Organizations of Persons with Disabilities in the fight against HIV&AIDS and for Health Promotion (UPHLS), brought together participants from the U.S. PEPFAR program, U.S. Centers for Disease Control and Prevention (CDC), the Rwanda Ministry of Health (MoH), Rwanda Biomedical Center (RBC), National Council of Persons with Disabilities (NCPD), Rwanda Housing Authority (RHA), Obstructive Pulmonary Diseases (OPDs), UN Agencies, and other HIV/AIDS actors.  Decision makers, stakeholders, development partners, and governmental institutions had opportunity to share achievements and best practices in including people with disabilities and the challenges they face in HIV/AIDS response in Rwanda.

“The Government of United States is proud to support the work of UPHLS and has done so since 2015, through the U.S. Centers for Disease Control and Prevention (CDC) and PEPFAR.  With U.S. CDC and PEPFAR support, UPHLS established the National Resource Center on disability and HIV/AIDS to improve accessibility standards and online access to health information,” said Ambassador Vrooman.  He added, “The U.S. Center for Disease Control and Prevention and PEPFAR will continue to support upgrades to health facility accessibility through the existing partnership with the Ministry of Health.”

U.S. CDC and PEPFAR support UPHLS to ensure the inclusion of persons with disabilities in HIV/AIDS programs at health facilities and at the community level through partnership, mentoring, and coaching of community structures and stakeholders; the ultimate goal being to be inclusive of people with disabilities in all aspects of HIV/AIDS response. PEPFAR has invested more than $1.6 billion in Rwanda since it started in 2004.

PEPFAR is the largest commitment by any nation to address a single disease in history, enabled by strong bipartisan support across nine U.S. congresses and four presidential administrations, and through the American people’s generosity.  PEPFAR shows the power of what is possible through compassionate, cost-effective, accountable, and transparent American foreign assistance.  Since PEPFAR’s inception in 2003, the U.S. government has invested more than $85 billion in the global HIV/AIDS response, saving more than 20 million lives, preventing millions of HIV infections, and achieving HIV/AIDS epidemic control in more than 50 countries around the world.