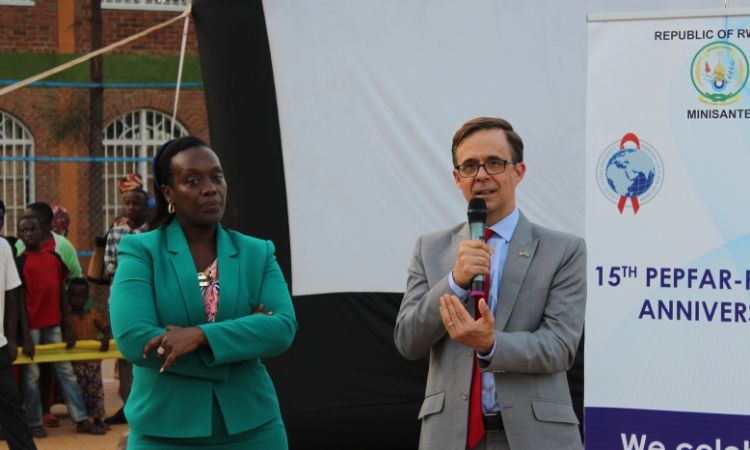 PEPFAR has invested more than one billion U.S. dollars to treat and fight HIV/AIDS in Rwanda since the program launched here in 2004. With PEPFAR and the U.S. Embassy’s support, Rwanda is on track to achieve epidemic control by the end of this year.

“Together, all of us will be able to fight discrimination and stigma, and move forward with inclusion,” Ambassador Vrooman said at the film event. “Today, I can say with confidence and pride that by working together we have the ability to control the HIV epidemic in Rwanda by 2020.”

The film describes PEPFAR programs that have helped tackle the HIV/AIDS epidemic in Rwanda. In partnership with the Government of Rwanda and local civil society organizations, PEPFAR has provided anti-retroviral treatment to nearly 100,000 HIV-positive persons living in Rwanda this year. It has provided assistance to more than 100,000 vulnerable children and their caregivers, and provided voluntary medical male circumcision to more than 300,000 men. PEPFAR also works to prevent HIV transmission from mothers to children, to empower vulnerable girls and women, and to support couples in which one partner is HIV-positive.

President George W. Bush launched PEPFAR in 2003. Since its inception, PEPFAR has saved more than 16 million lives around the world. It is regarded as one of the most effective and efficient U.S. foreign assistance programs. By focusing its efforts on where the AIDS epidemic is the largest and the need is the highest, PEPFAR hastens progress towards ending the epidemic, and reduces the future costs required to sustain the HIV/AIDS response.

More information is available at https://www.pepfar.gov.